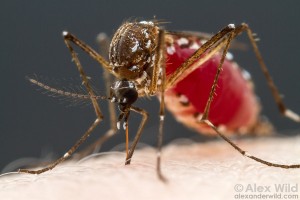 Evolution of mosquito host preference
The McBride lab focuses primarily on olfactory behavior in the mosquito Aedes aegypti. This mosquito includes an ancestral forest form that opportunistically bites a variety of animals and a recently evolved domestic form that specializes in biting humans and has become the major worldwide vector of dengue, yellow fever, and Chikungunya viruses. One of the many new behaviors that help the domestic form find humans is a remarkably robust, novel preference for human body odor. By comparing the two forms, we have begun to identify genetic changes associated with this preference. In particular, human-preferring mosquitoes carry variants of an odorant receptor AaegOr4 that are more highly expressed and more sensitive to a particular component of human odor. This is only the tip of the iceberg.  There is much more to discover about how preference for humans evolved and how it is regulated at the level of genes and neural circuits.

What are the specific nucleotide changes in AaegOr4 that alter preference?
Where did these changes originate and what evolutionary pressures have they experienced?
What other genes and genetic changes contribute to preference for humans?
How do the relevant genetic changes alter the structure and sensitivity of olfactory circuits?

We are also beginning to examine the genetic and neural basis of host preference evolution in Culex pipiens. In this case, one form prefers biting birds, while the other prefers mammals. We are mapping underlying loci and comparing olfactory circuits in the two types of populations. 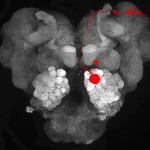 Central olfactory circuits underlying preference for humans
In addition to characterizing the genetic changes underlying preference of humans, we are also interested in understanding how these changes affect signaling in central olfactory circuits to drive a mosquito to fly towards humans. For these studies we are developing approaches to record and image activity in the brains of forest and domestic mosquitoes.

Do changes in central circuits also contribute to preference evolution?
Has the central representation of host odor evolved?
How does the olfactory system integrate individual inputs to generate a robust and specific response to the singular blend of odors given off by humans? 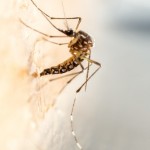 Evolution of other behaviors that adapt mosquitoes to humans
Preference for human odor is not the only behavior that helps domestic mosquitoes exploit humans. They have also evolved a novel propensity to fly into homes, novel oviposition preference, and altered defensive behavior as larvae and pupae. Altered defensive behavior is likely a consequence of breeding exclusively in indoor water-storage containers devoid of predators rather than the predator-rich tree holes used by forest ancestors. We also plan to investigate the molecular basis of these other fascinating behaviors.

Genomics of hybridization and host use in Culex pipiens

The mosquito Culex pipiens is a major vector of West Nile Virus and comprises two distinct varieties or forms. In eastern North America and northern Europe, Cx. pipiens form pipiens is cold-adapted, lives above ground, and tends to bite birds, while Cx. pipiens form molestus is warm-adapted, lives below ground in urban basements and subway systems, and tends to bite mammals. West Nile Virus epidemics in the U.S. have been attributed to hybridization, as hybrids may be more willing to bite diverse hosts and therefore more likely to spread West Nile Virus to humans from its bird reservoirs. We are interested in exploring genomic patterns of divergence and introgression in order to identify and characterize the molecular basis of bird and mammal biting in this mosquito.

PipPop – the Culex pipiens Population Genomics Project
Despite its importance to human health, the origin and evolutionary history of Culex pipiens is poorly understood. It currently has two recognized subspecies and multiple varieties or forms (see above). However, hybridization is widespread both within and outside the complex, and the relationship between recognized taxa and ecological variation is not always clear. We plan to sequence the genomes of hundreds of individuals from across the global range of the species in order to better understand its origin, pattern of dispersal, and current population structure. We welcome collaboration from Culex researchers on this project. Please see the project page for more details.